Shardlow Marina Afternoon sesh 13lb Pike but still a FAIL!!!
Target: Gudgeon, Dace, Silver Bream and Zander. any new PB :-)
Tactics: I rod for the little un's on Maggot then a little un on the second rod for a Zander.
Result: Float fished size 18 hook maggot, trickle fed maggot but cold and deep..didnt look good
Tried for an hour with nothing, moved float in close and left it then tried spinning on the lure rod.
Caught the following 2lb pike on 1st cast on a gold Rublex Ondex spinner... thought it was a Zander....DOH!!!! 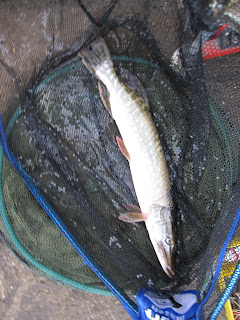 Then the float fished maggot had a bite... switched back to the float and caught a little roach.
Fished the roach on a paternoster float rig about 3ft off the bottom.
After five mins the float dived under... Zander.... NO a 13lb pike :-( :-) 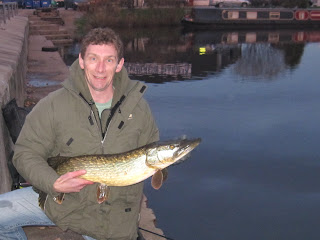