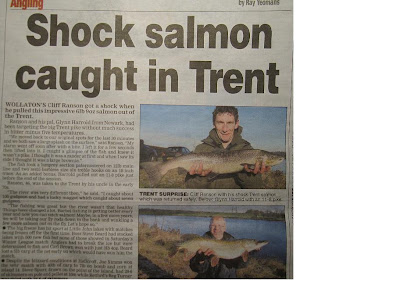 To be honest I reckon we are both still in shock from this session at Stoke Bardolph.

The Target species was Pike, there were rumours of a lurking Trent Crocodile Sized Pike, frightening the locals.

The tactics were to leapfrog each other...so to speak... down the bank, Glynn on 2 large mackerel tails on the bottom and me on paternostered lamprey (which got me 2 9+lbers and a 15 last time).

I also tried spinning and thought i was getting the odd "knock" until I realised that it was the eyes of the rod icing up and catching the line :-( 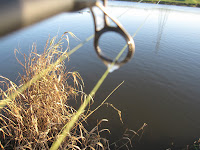 So we decided to give the last 30 mins a go back in the starting spot next to our cars.

We both saw a big splash on the surface, which was unusual considering the conditions, then my alarm went off, not the usual bite really but i gave it some time then lifted into it anyway.

It was a great fight, the fish was zipping all over the place, i saw its head.. it definately wasnt a pike..It looked like a Zander?... then we saw its body, covered in dark spots, i thought it was a Huge Browny. 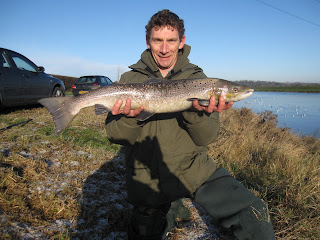 We both took great care in looking after him, he weighed in at an amazing 6lb 9oz, we carefully put him back, ensuring it was fully recovered before letting it go.

Check out the release video.... thanks for the comment about my backside Glynn. :-)

To be honest we both had no idea that the Trent River Trust had been putting in so much effort into stocking Salmon in the River Dove for many years. We both love Trout fishing as well, so hopefully, in the not to distant future, we will be able to take our fly fishing gear on to the Trent, and winkle out a few more Salmon!
(As long as i keep the PB Glynn :-) )

The icing on the cake was Glynn pulling out an 11 1/2 pound pike, not as big as we were after, but still a cracking fish.
Posted by Cliff at 23:34 2 comments: Links to this post

This was the temperature when I got in the car to set off on our latest Piking session at 7am. A bit chilly:-) 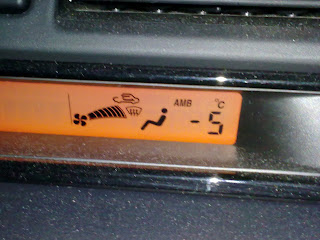 I even managed to turn up before Cliff this time......but he still started fishing before me!!

Setting up was a chilly affair, with my thumb ends going numb. At the top of the bank it was really cold but it was strangely warmed down the bank and closer to the water. The session started a bit slow, with no runs or signs of fish at all. However, just as I was contemplating packing up I pulled in a nice 11lb 8oz Pike. It took a little dead roach fish about 2 foot off the bottom on a paternoster. Hopefully Cliff will post a picture.....unless he managed to chop my head off. 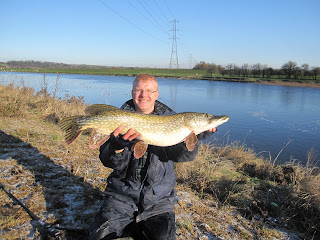 This was all a little insignificant as Cliff had just had, arguably, the fish of a lifetime but I'll let him tell the story:-)!!

Cliff filling his belly with a mince pie....well it is nearly Christmas!! 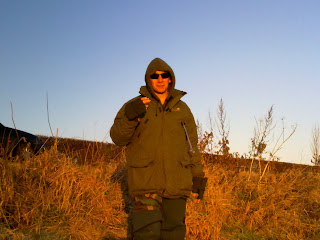