The two intrepid anglers were off to try and nail a 20lber on a bitterly cold Tuesday Morning.

Starting off at the fence near the lower car park, then leap frogging back up the river, moving every 40 mins or so.

The pike were extremely finicky biters, Glynn had the first run on a paternostered roach, and lost the fish.
Score: Glynn 1/2 Cliff 0;

Cliff had the second run connecting with the fish but losing it on a paternostered lamprey.
Score: Glynn 1/2 Cliff 1/2;

Glynn then had another run on roach, again losing it.
Score: Glynn 1 Cliff 1/2;

We moved a long way down upstream, Cliff spotted a top spot for Glynn and took the dodgy spot next to it :-)

After 10 minutes, Glynn muttered the phrase that would normally stop any fish from feeding " This looks like a hotspot" Instantly Cliffs rod twitched with another solid bite, but again the fish threw the bait.
Score: Glynn 1 Cliff 1;

Then Glynn's rod went, this time Glynn caught one of the buggers.
We both used our years of experience landing an extremely lightly hooked fish :-)
The hooks feel out in the landing net.!!! 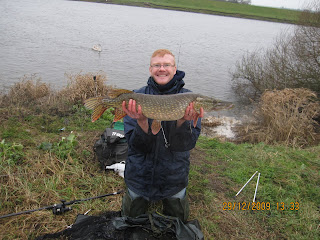 Glynn then had another 2 cast iron runs, not connecting to either fish???? 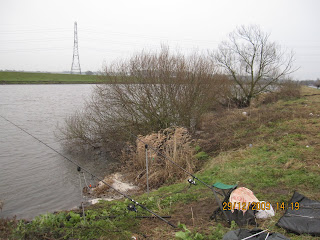 Cliff realised how much he'd cocked up and shamelessly decided to poach from Glynns swim to try and level the score. 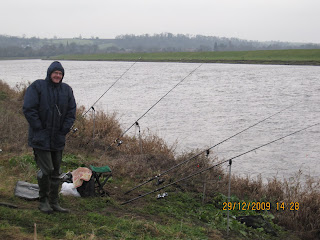 A very odd day all in all, the evidence seemed to point to fish being hard on the very bottom (leaches on fish, Glynn's fish being hooked in the side of the mouth taking a bait tight off the bottom) and the pike not really swallowing the bait properly, just picking it up and running, whilst only very lightly holding it in their mouths.

Well done GT, the bragging rights are secured.... until next time mate :-)
Posted by Cliff at 17:34 1 comment: Links to this post