After suggesting we take an afternoon off work (Friday 12th March) to get some last minute fishing in before the season ends, I was expecting a few hours piking on the Trent or maybe the Witham but no, Cliff had a top tip!! He had it on good advice that Nottingham Canal (along London Road) was an up and coming Zander hotspot!?!


So not very confidently I agreed to hit the Zander at the "we can't fail here" top tip spot. We started at the Trent end of the canal and leap frogged along to just passed Hooters (well that's a hotspot). We didn't see sight nor sound of a Zander or any other fish for that matter but persever we did........as we always do:-)


It got to about 5:15 and Cliff said "I reckon they'll come on at a quarter to 6". Well the predicted time came and went but at about 5 passed 6 I got a finicky little bite. I picked the rod up and felt the line, as the new 'Zander tzar' (Cliff) had instructed and could feel some pulls on the line, so I struck. You should have seen Cliff's face as he thought I had a Zander, it was a picture but no it was a nice little pike of 6lb 8oz. It took a small descaled roach, fished hard on the bottom, which I'd pierced a few times and slit behind the head to "let the brain juices flow out". 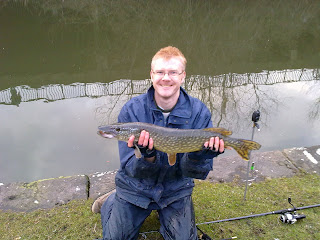 "well done" said Cliff, through the usual gritted teeth that we both seem to possess when congratulating each other when we've not caught:-) Cliff did also managed to winkle a much bigger 9lb pike out, so all was not lost. 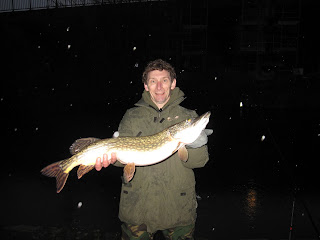 So not exactly a Zander hotspot but at least we caught..............and we'll keep trying for that elusive Zander!!