Our next session was at Foremark Reservoir. I really enjoy fishing here, it's a really beautiful reservoir surrounded by woodlands. 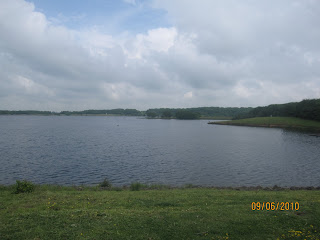 After deciding a trouting session was called for, following my walk down the river and spotting mayfly on the bankside, the weather turned and we had loads of rain and the temperature dropped.....typical!! Still after talking to the baliff the prospects still looked good with the trout falling to anything with black and red in it (apparently). We started fishing next to the cars as Cliff had seen some fish moving. The wind was quite testing and with my doubtful casting I quickly decided I fancied a walk to a 'better' spot, so off I went. On my way round to the far side of Falmingo Bay I spotted a largish trout lying on the bottom in about 2 foot of water. I stealthily crept to the edge of the water and made a delicate little cast.....which frightened the life out of the trout and off it shot :-) !!
I got to the far bank and saw a few fish jumping. I tried the usual 3 fly approach with 2 buzzers and a gold head hares ear on the point but no takers. I changed to my new intermediate line and a black and orange lure with big yellow eyes and had a tug almost straight away. Nothing followed, so after about another 30 mins I decided to move to my "can't fail spot". I tried the buzzers but nothing and then tried the lure again and promptly pulled out a little 1.5lb rainbow, nice!
I decided to walk back a bit and see how Cliff was getting on, not trying to rub his nose in it or owt :-) Cliff had had a few takes but nothing definite. He tried my 'caught a brownie there last time' spot but nowt. He walked back around to the yacht club bay and I followed him around a little later. Not long after polling up next to Clilff, who was still trying hard, I latched into a lightly hooked rainbow which had taken the top dropper a red buzzer but then promptly threw the hook. I switched to the successful black and orange lure, with the big yellow eyes and a couple of casts in I hooked and landed.......................a little perch!! Cliff was not amused and eventually took off to fish from a jetty, getting desperate by now. I stayed in the perch swim and as I was reeling in to packup I decided just to throw the lure in a wind lane about 3 foot from the bank and just pull it through. On the second pull through I got a tug and out popped another little perch. I couldn't believe it! 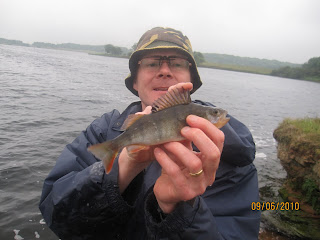 Well that was it I packed up and went to find Cliff, who was still trying hard but to no avail. Cliff remembered that the baliff was locking the gate at 9:30 and it was 9:30, bugger!! We rushed back to the cars and basically chucked all the gear in the back and rushed to get out before being locked in for the night.............explain that one ot ther missus!!
Another enjoyable session at a great, picturesque venue.
Posted by ginge27 at 21:31