After many weeks of trying to coax the kids into coming fishing (just so I can get some extra fishing in:-) I got an unexpected request "dad can we go fishing today?" Well the answer was obviously, "of course we can".

I picked up a pint of mixed maggots, Holly likes the blue ones!! and off we went. I quickly set Thomas's rod up and set about sorting Holly's out when the call came "I've got one". Thomas had hooked a small carp, which put up a nice scrap but escaped at the net. He cast in again and I continued with Holly's setup but straight away "I've got another" came the call! I decided to get Thomas to wait a few minutes while I got Holly up and running. Both finally set up and cast in, it was non-stop moving between the two, either helping land and unhook varying sizes of small carp, roach and a chub or putting maggots on the hook. 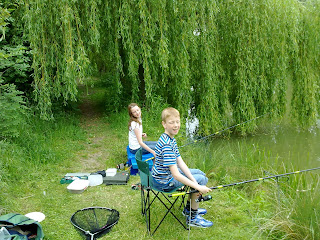 Fishermen and women of the future?

There were carp all other the place, some quite large at maybe a few pounds. One in particular kept catching my eye, a Ghost Carp (I think) kept swimming passed right on the surface. I was eager to get a rod out but didn't get the time!! I did eventually but had forgotten to bring some bread to fish on the surface, so stuck on some sweetcorn and cast into the margins. I had a few bites but missed most as I was still unhooking/rebaiting for the kids. I did manage to winkle out a few little commons and a really small tench. 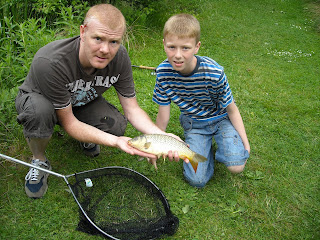 Just before we packed up Holly got into a good carp of around 3lb. It fought good and hard and Holly had to hang on. "My hands aching" came after a couple of minutes but the carp wasn't giving up. It was pulling line off the clutch and kept making for an overhanging tree. We got it close to the net on a few occassions but eventually it broke free and threw the hook. What a shame!! 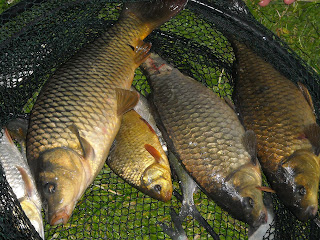 Some of these look quite big!!

All in all a very enjoyable few hours spent getting the kids interested in some fishing. Both of them did really well and I had very few tanlges to sort out. Here's to the next time......and that Ghostie!!
Posted by ginge27 at 18:24