A couple of hours down the river...

At work I'd been thinking about having a few hours down the river but on the drive home the heavens opened and it tipped it down, doh!!

So I decided not to bother but after a trip to Morrisons, when we got out there were lovely blue skies. So I grabbed the gear and shot off for a quick sessions and after reports of a large pike being lost, I decided to throw the pike gear in too.

Well, first cast with a lamprey and I was into this lovely little 7lb pike. In the net with it were 3 roach which it coughed up. Two were very fresh, one with a tooth stuck in it's side and the other was a very pale affair which was obviously a bit older. 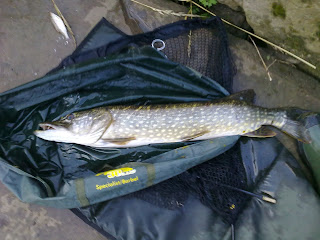 Not a bad start but not the big one I was after. I baited up again and waited. Then this started to roll over.... 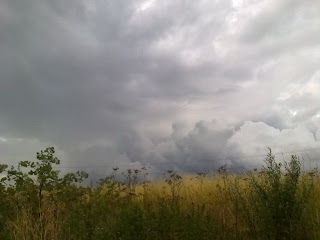 After the downpour, no more pike runs came so I switched to try and winkle out a chub or barbel. A few casts later and a nise 3lb 4oz chub was in the net. Whilst trying to get my camera out, the chub (in the weigh sling) gave a big flick of it's tail and flew out of the sling, across the top of my left wader and plop, stright back into the river. I guess it didn't want it's picture taking :-)