Another trip to catch the elusive Zander.
Location: Beeston canal, rear Boots entrance 1km towards the Trent.
Set off at 7:30 fishing at about 810 one rod with v small popup bream, v light tackle.
Lure fishing on the other. 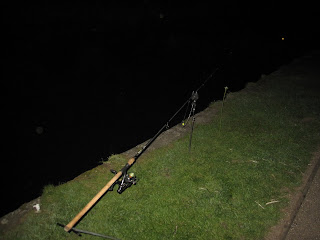 There was, what sounded like, a huge fish taking fish in the reeds nearby, i tried casting slightly upstream of it a few times without snagging anything(a skill a have not mastered yet).
Eventually the rod end started twitching, but yet again, no bite alarm indication. I lifted the rod off of the rests, when i was sure the potential Zander was on, and struck into it. The following was the result, a 3lb 12oz pikelet. 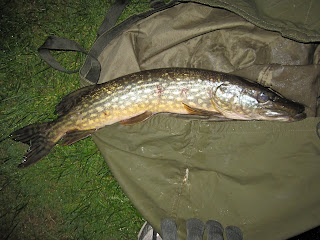 I tried a new tactic of holding the rod and twitching the bait (like an injured fish) and had instant take.
Again it was really light bite and again i let it swallow the bait and struck. This time it came off about 4 foot from the net... didnt get to see it :-(... was it a Zander? probably not, but my luck will change soon :-)
Left about 10pm...
Posted by Cliff at 20:58 1 comment:

During the latest outing to the Finger Ponds at Holme Pierrepoint, I was surprised when what I thought was a cat on the far bank started swimming across the lake. "That's no cat" I thought. I wasn't wrong, it was infact a large mink!! I couldn't believe it.

Later at the end of the session I saw another smaller mink come swimming across to the bank next to me from a small island. It then proceeded to dive under the water and the trail of bubbles headed towards my lamprey bait!! Well I didn't fancy unhooking that, so I reeled in sharpish :-)

I did manage to winkle out a finicky biting pike of 10lb 10oz on a paternostered roach. 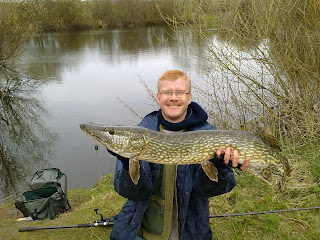 A great mornings piking and the usual cracking banter! Hey Cliff, maybe you could give me some lessons in baliff dodging?

There are plenty of cracking looking 'pikey' spots down at the lakes. Deffo fancy another crack at the 30 lurking down there.
Posted by ginge27 at 22:43 2 comments:

Holme Pierrepont Finger Ponds: The Hunt for a 30lb pike

After a bit of debate we decided to target pike from the Finger Ponds at HPP:
Glynn Arrived on time, which was a bit of a shocker, but understandable as he's got some ground to catch up on with cliff leading 9-7 in the big fish off :-)
Travelling light we walked to the far end of the lakes by the river, passing some cracking scenery... beautiful lakes .... very "pikey" spots .. and the odd car with a couple trying to keep warm ;-0
We both had 2 rods out, one float one ledgered. Giving each spot about 45 minutes we worked our way back towards our cars. 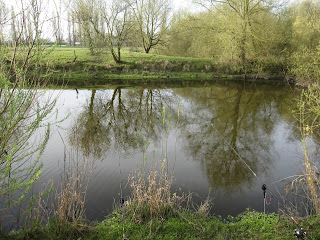 Glynn had a lucky encounter with the bailif, which left him £4 lighter but with some cracking inside info. which wasnt shared until 5 mins to go:-)
After the next and final move, glynn employed his newly found tactics to great effect, capturing a magnificent 10lb 10oz pike, only for cliff to describe it as a "litttle un" to some inquisitive passers by...soz :-) 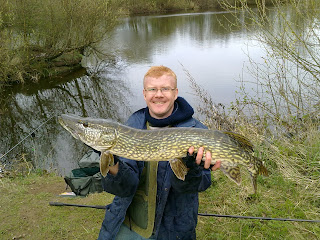 Cliff then looked at glynns setup and the penny dropped, fish off of the bottom by about 1-2 ft. Cliff then took the weight off of the float rig and upped the bait depth and added some cork to the ledgered bream.
We both had calls from our better halfs and decided to call it a day, luckily Cliffs float had gone, it was a manky 6-12 pike.. then as it was on the bank, cliff looked up and Glynn didnt look happy, looking round my other rod had a fish on, another manky 6-13 pike.... 2 fish in the same landing net... i love it when a plan comes together. 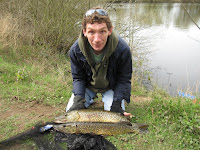 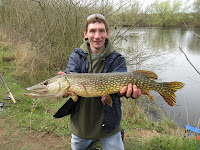 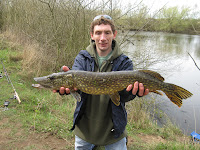 Overall, Glynn won the fish of the day but Cliff won 2-1 and was £4 better off.... All in all a great morning with some cracking pike spots, we are ready to capture a 30 next time, now that we know the correct tactics.
Posted by Cliff at 21:09 2 comments: