Well it's been a couple of months since our last entry on this blog but we haven't gone away we've just been recharging our batteries ready for another season on the banks.

So pike were the target and a new location (picked by Cliff) on the Trent at Holme Pierrepont was the venue. "It looks really pikey" said Cliff on the phone.

We started the session by getting told, very politely, to move our cars as the 3 policemen living locally were very hot......Cliff's eyes lit up:-) So we tried the pikey looking backwater for a few hours, using 4 rods, without a single touch. Cliff did at one point think he was pulling a body out as the heavy 'dead' weight slowly came in before falling off without showing itself.

We finally decided to move to our "can't fail" hotspot at Stoke Bardolph. "The river is really up, so it'll be tough" said I but when we got there it look great. Well, first cast Cliff got a few knocks and struck into....nothing. Strange bite that one. I then had a run that consisted of a few knocks. I struck in and thought I'd hooked the pike good and proper as it flashed on the surface but then let go. Clliff moved and had another 'knock-knock' bite and sent me a message to say the score was 1 to him and 0.5 to me. I then introduced some new scoring and as I'd seen my fish I thought I should be on 0.75. Yep we were getting desperate!!

Anyway, I had another 'knock-knock' bite and struck into a pike which actually stayed on. It came in without much of a fight, possibly due to the trace being wrapped around it's snout. This very welcome and nicely marked pike weighed in at 8lb 2oz and was caught on a herring tail. 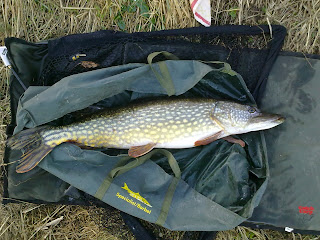 I then had a couple more strange bites and a proper run but struck into nothing again. Cliff tried his best for as long as he could see but to no prevail. All in all another enjoyable day down the bank, even if it was a little tough again. We must be due a red letter day soon!!
Posted by ginge27 at 20:46