Melbourne Pool after a PB record Bream or Tench

Cliff and Vic popped off to Melbourne Pool Derbyshire after a hot tip that there were some great Tench/Bream in there. Glynn couldn't make it unfortunately.
Day Tickets are £6 and limited to 10 for the lake on a day, purchased from http://www.melbournegun.co.uk/
Arrived at about 7:30, was going to fish on the NE bank next to the road, however after being told that the fish follow the wind and after taking advice from a knowledgeable regular we went round to the West side of the southern island, in the woods.(Where the bigger fish live apparently)... This must be one of the best views in the country when fishing.... 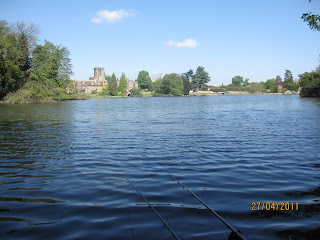 I fished 2 rods and loaded each swim with a dozen large feeder loads of crumb/sweetcorn/maggot/hemp/worm extract/pellet mix. Vic fished one rod pellet method feeder.
After a couple of hours caught a new pb 4lb14oz on the rod in the middle of the islands on fake corn and shrimp boilie combo. This is a Tiddler compared to the many fish up to 8lb+ the chap in the next swim had the previous day (he bailed out a gallon of maggots though). 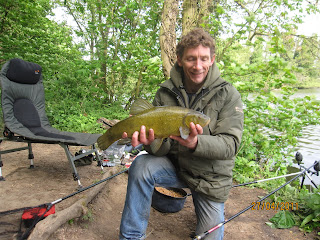 We all struggled to catch on the lake, the fish seemed to switch off due to the cold NE wind the night before.
We left around 7PM as the only fish we heard of being caught during the the rest of the day, was one Tench in the margins and a 1/2 lb pike  which took a red maggot! 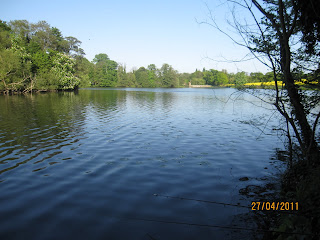