Last dash before the end of the season

So Glynn finally got off his fat old ass and got down the river for a few hours before the end of the season!!
Thought I'd try to locate the 20lb Witham pike John keeps catching. 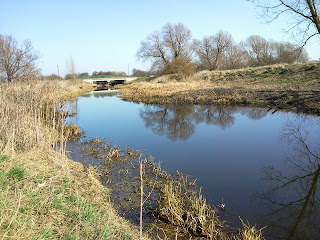 It was a beautiful afternoon, with some lovely warm sunshine. However, the river was really low and gin clear! Tried a couple of spots but nothing doing. So decided to take a longer walk upstream and stopped at a deeper looking spot on a bend. First cast and hooked a little jack pike, which threw the hooks. Next cast had a run but struck into nothing. Next cast hooked another small jack but again it threw the hooks, bugger!!

Had a few more casts but nothing doing. Must have scared them (or the same one) off. Decided to walk back downstream to the spot where I started and dropped a little mackerel tail mid river. Was watching the shallows when I spotted a jack pike come gliding down. It stopped right in front of me and just waited there for a 10-20 secs and then it slowly swam off at a diagonal straight towards my bait. Would you believe it, 30 secs later I get a run and hook into (and land this time) a 3lb ish jack pike :-) 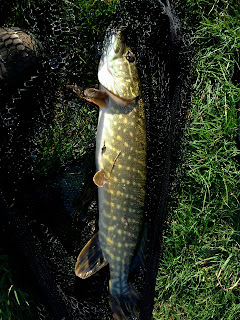 Next moved to the spot I think the 20lb has come out of. Had a few casts but not a touch.....not sure if I was relieved or not:-) So a nice finish to the season. Contemplating trying a spot of fly fishing down there one summer evening......
Posted by ginge27 at 21:46