A day at Shardlow Marina

Cliff met Bob (yes he is my uncle :-)) and Nigel for a days fishing at Shardlow. Cliff targeted pike, Bob was on the feeder with maggot after anything and hopefully a surprise or too. Nigel was on meat, sweetcorn then maggot.

The gates were open from 8-5, we drove around and fished at the river entrance. 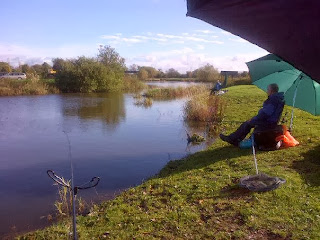 Bob was landing another small fish when a pike took it at his feet, Cliff was typically sympathetic and dropped a roach a few feet from bob, 30 minutes later this 11lb beauty took it. 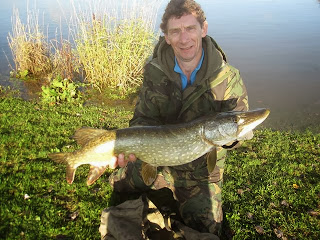 Nigel also landed a few bits and the smallest fish i've ever seen landed, too big for the hook it was stuck to the ledger weight and was about 1/2 inch long max :-)
Didnt get anything else but had a great day and met a local fishing celeb called Ian Hartley who holds the record for Derwent Barbel at 17.10 lbs (Story here), he was after Zander from the concrete steps, he had a couple of runs but didnt connect to anything by mid day. This is his record.... great guy.

Fished to the last second before the gate came down, but nothing else was interested great day though.
Posted by Cliff at 12:28