After a day of rain Cliff fancied his chances of landing a decent Barbel and set off to Beeston on the Trent below the weir for a 3 hour evening session.

Cliff lost a fish which felt like a barbel early on, the floro-carbon rig snapped in the same place as the last fish he lost. So he switched to a 12lb Dacron rig and managed to land an 8lb+ barbel after a typical river barbel take, the rod flying off the rod rest :-). 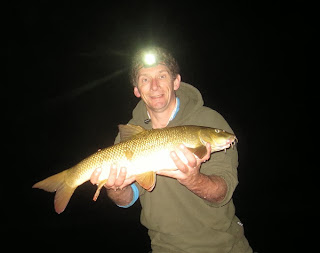 The rig was 3mm halibut pellets in the 90g feeder and 4ft 12lb Dacron leader to a size 10 hook with a bait band and a size 8 mm halibut pellet, cliff landed this Barbel after a great fight in very fast water. 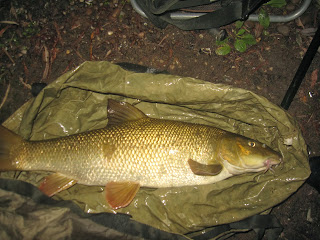 That was the only fish of the night but was well worth it.
Posted by Cliff at 23:13